By Hack The Patriarchy on 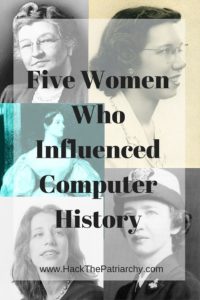 Women have played an important role in the world of computers from the beginning.

Many people call Ada Lovelace “the first programmer,” but “the first computer scientist” would be more accurate. Charles Babbage never completed his Analytical Engine, and it wasn’t possible to write actual code for it, but Lovelace demonstrated in detail how to turn an algorithm into a computer program. Even more important, she saw broad possibilities in “the science of operations,” recognizing it could be applied to any subject. It would be a century before technology could catch up to her ideas.

Edith Clarke also did her most important work before the computer era, but her work in electrical engineering prefigured computers. In 1919 she became the first woman to get a degree in electrical engineering from MIT. At General Electric she devised a graphical calculator that solved problems of current, voltage, and impedance in power lines. Before the electronic devices, “computers” meant people (usually women) whose work consisted of calculations, and she trained and directed a team at AT&T.

Frances “Betty” Holberton worked as a “computer” during World War II, performing ballistics calculations, and then became a member of the ENIAC programming team, the first people to program an electronic computer. Programming the ENIAC wasn’t a matter of writing code in a language, but more one of reverse-engineering the machine. She later participated in the development of the UNIVAC computer and the creation of the COBOL programming language.

When we talk about COBOL, we immediately think of Admiral Grace Hopper, whose great achievement might be summarized as relating computers to common sense. She headed the team that devised FLOW-MATIC, the first business-oriented programming language, at Remington Rand. She followed this up with COBOL, which for many years was the dominant computer language for business applications. Her work on these languages demonstrated that non-mathematicians could write computer code.

Susan Kare was an artist who joined the team developing the original Macintosh computer. Her contributions to its graphic user interface included proportional screen typefaces, as well as icons for operations like “cut,” “paste,” and “trash,” which GUIs have imitated ever since. Satisfying Steve Jobs was never easy, and the images that reached the Mac were just the top selections from many proposals that she created. Without the contributions of these women, computing wouldn’t be what it is today.Save
0