In the male dominated world of video game development, Carol Shaw stands out not only as a woman in technology role model, but as an innovative designer. She began her career with Atari in 1978, but according to PC Magazine she may be the first female video game developer, ever.

Throughout her life, Shaw was often the only female perusing her chosen interest. Her parents encouraged her to excel in math and computer science. In college, at UC Berkley, Shaw studied engineering. As she finished her coursework for a Masters in Computer Science, Shaw interviewed with Atari. She was in a work-study program at the time, but Atari hired her because of her programing knowledge. Author Chris Suellentrop of the New York Times states that the first commercially released video game designed by a woman was Carol Shaw’s Tic-Tac-Toe. In the late 1970s and early ’80s, one person created the entire game. Shaw not only did the programming but also created the sound and graphics.

In 2011 Benj Edwards of Vintage Computing and Gaming conducted a very interesting interview with Shaw. She noted that since she was used to being the only woman in math and science, she was comfortable working with men only. In general, Shaw didn’t care what people thought of her interests or her career. She credits the heightened awareness of feminism in the 1970s, which helped her to understand that she could do what she wanted.

Shaw worked for Atari for two years then the industry took a dip. She was an assembly language programmer at Tandem for 16 months and then Activision recruited her. The first game she created for that company was the popular River Raid, for the Atari 2600. In the early 1980s, “shooting” games took place on one screen but Shaw developed a scrolling format. River Raid won several awards including Infoworld’s best action game and best Atari 8-bit game of the year.

In 1984 the video game industry reached another low and Shaw returned to Tandem. Because of her success in the industry and her careful investments she retired early, in 1990. Unfortunately, there are still few women in the video game industry. A 2014 International Game Developers Association (IGDA) study noted that only 22 percent of developers are women. We need more women in all fields of technology, so contact us to learn how to make that happen.Save 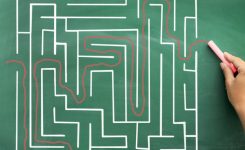